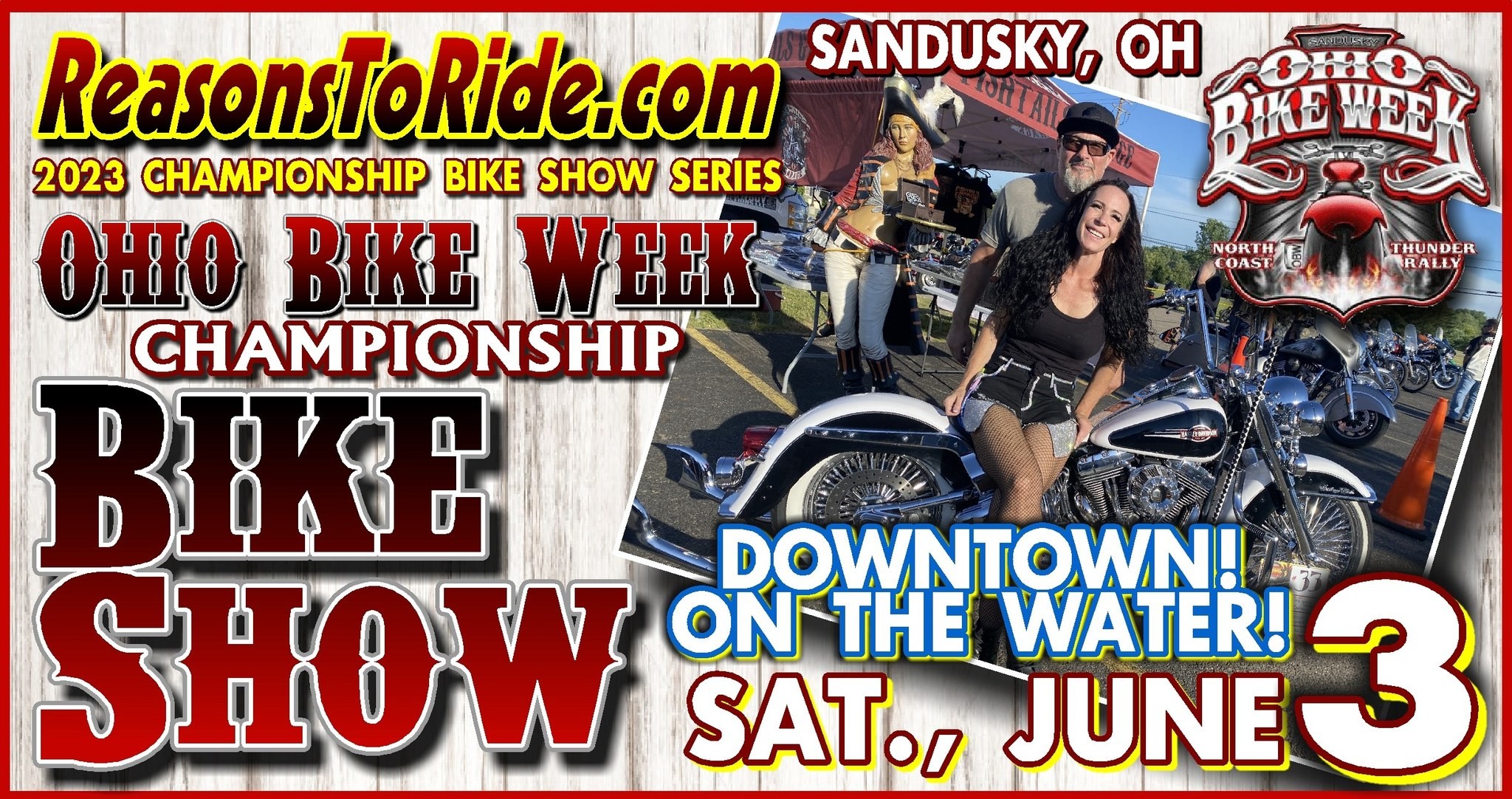 by Reasons To Ride
384 384 people viewed this event.
Paid
OHIO BIKE WEEK CHAMPIONSHIP SHOW IS BACK DOWNTOWN – ON THE WATER!
RTR is pleased to announce that we will once again be hosting an OFFICIAL OHIO BIKE WEEK BIKE SHOW in downtown Sandusky – right on the WATER! This will be an informal, Ride-In, Bike Show following the RTR Championship Bike Show Series Rules and Procedures. It will be held in Downtown Sandusky, OH on Saturday, June 3rd.
We’re excited to be back downtown and being in the midst of the WORLD FAMOUS BLOCK PARTY!
So ride on down, park your bike and enjoy the LIVE MUSIC and festivities in the midst of the LARGEST MOTORCYCLE EVENT IN THE MIDWEST!
We are anticipating that feature bike space will be limited, so we are encouraging everyone to REGISTER as soon as possible for this show. We will be reserving space and assigned spots for bikes that have pre-registered online.
As previously, registration will be discounted in advance AND you get a FREE Exhibitor Bike Show Shirt! We will be accepting bikes the day of the show – but only as space allows and priority will be given to the pre-registered ones.
If you are interested in participating in the Championship Bike Show in Sandusky, as part of Ohio Bike Week, please be certain to register AS SOON AS POSSIBLE at REASONStoRIDE.com – select Bike Shows from the Menu Bar. A select number of Bikes will be accepted for the Championship Row – which does require you to apply in advance by submitting photos and some background on each bike being considered. You can email us at BikeShowInfo@gmail.com with photos and information on the bike. Make certain that you include a listing of any awards received at RTR or TRO BIKE SHOWS.
Email BikeShowInfo@gmail.com TODAY to reserve your spot with RtR for Ohio Bike Week!
Standard Show Classes
MILITARY THEMED BIKE (Specialty Class)
US / PATRIOTIC THEMED BIKE (Specialty Class)
VINTAGE MILITARY MOTORCYCLE (Specialty Class)
Vintage
Vintage Import Stock (European / Asian)
Vintage Domestic Stock
Vintage Custom (Resto-Mod)
Vintage Restored
Stock Import
Stock Domestic (V-Twin)
Custom Import
Custom Domestic (V-Twin)
Chopper
Rat Bike / Garage Build
Café Racer
Touring / Bagger
Custom Touring
Radical
Radical Import
Radical Domestic
Radical Bagger
Performance / Racing
Adventure / Off-Road
Trike
Custom Paint
BEST OF SHOW
PEOPLE’S CHOICE
A class must have at least 3 entries in order to qualify for a BEST OF CLASS Award. Subcategories and Specialty Classes (show in italics) must have at least 3 distinct entries within in order to be broken out but is done at the discretion of the event organizers. Judged Shows will include both a BEST OF SHOW and a PEOPLE’S CHOICE AWARD. Reasons To Ride and show organizers reserve the right to consolidate or add classes at their discretion.

Reasons To Ride’s mission is too inform and entertain the Midwest Riding Community by creating the most comprehensive and reliable resource for motorcycle enthusiasts nationwide.